Weather in Chicago, US

Formally incorporated in 1837, Chicago lies near a portage between the Great Lakes and the Mississippi River watershed. The area expanded in the mid-nineteenth century. The Chicago metropolitan area (often referred to as the Greater Chicagoland Area), is home to nearly 10 million people and is the third-largest city in the United States. In 2015, Chicago welcomed more than 52 million international and domestic visitors - making it one of the top visited cities in the nation.

Chicago is an easy city to navigate and is perfect for walking. However, if desired – there are various forms of transportation to get around the city.

Metra Commuter Rail: If you’re traveling to and from the outlying suburbs and downtown, the high-speed Metra commuter rail is an easy way to travel. For exact fares and route maps, visit the Metra website at metrarail.com.

Taxis: Taxis are plentiful and easy to hail downtown, at airports, and throughout many neighborhoods. Credit cards are accepted in all taxi cabs by city mandate. It is standard to tip the driver about 15-20% of the fare, plus $1-2 per bag if the driver helps you with luggage. Visit the City of Chicago website for additional taxicab passenger information.

The city of Chicago lies within the humid continental climate zone and experiences four distinct seasons each year:

Winter (December 1 to February 28): Winters in Chicago can range from mild to bitter cold, but visitors can take advantage of hotel deals, shopping sales, a full slate of performing arts, and a winter festival. Keep in mind that various museums and attractions are closed on Thanksgiving Day (the fourth Thursday of November) and nearly everything in the city is closed on Christmas Day (Dec. 25). The temperature can go as low as 30 degrees Fahrenheit below zero when accounting for the wind chill, so proper winter attire is highly recommended.

Spring (March 1 to May 31): Average daytime temperatures range between the high 50s and low 70s and is generally very comfortable for walking around. However, you should come prepared for rain, and be sure to bring a light jacket for days that may still dip into the high 30s and 40s.

Summer (June 1 to August 31): June is usually temperate, but July and August can be hot and humid. Average summer temperatures range from the high 50s to the mid-80s. Temperatures can fluctuate significantly if there is a heat wave with high humidity, or with strong breezes off of Lake Michigan. The city comes alive in the summer with free festivals, lakefront spectacles, such as the Air and Water Show and the Venetian Night boat parade, fireworks at Navy Pier every Wednesday and Saturday, and free concerts around the Loop and at Millennium Park.

Fall (September 1 to November 30): September brings the most ideal weather of the year, with daytime highs ranging in the 60s and 70. In the evenings, Chicago often sees temperatures drop into the 40s. The parks and forest preserves that surround the city are ablaze with the reds, yellows and oranges of autumn. Keep in mind that some of the city's outdoor attractions begin reducing their operational hours during this time in preparation for the winter season. 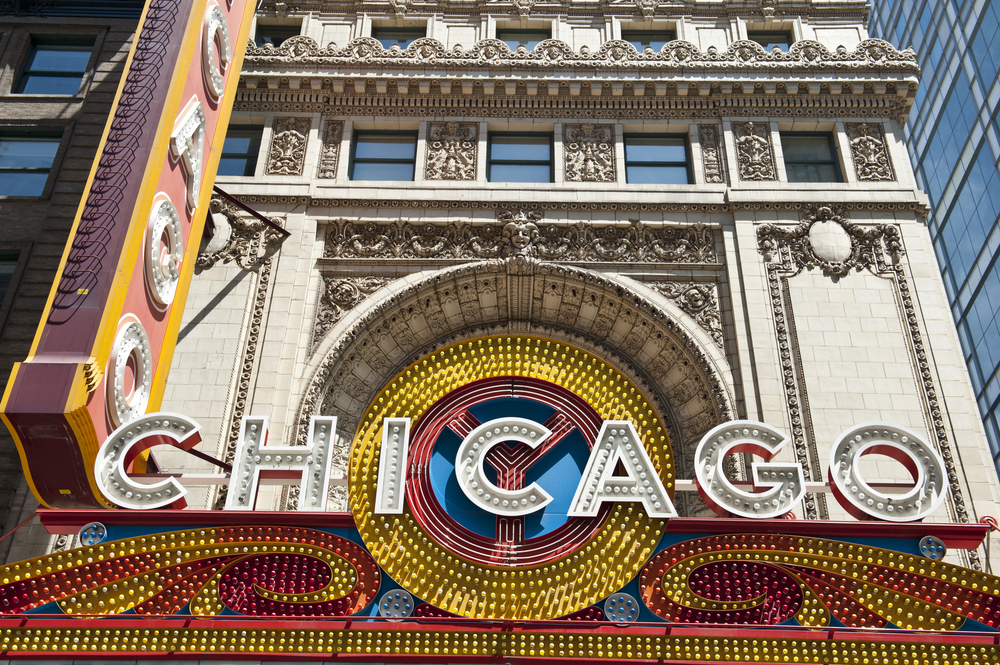 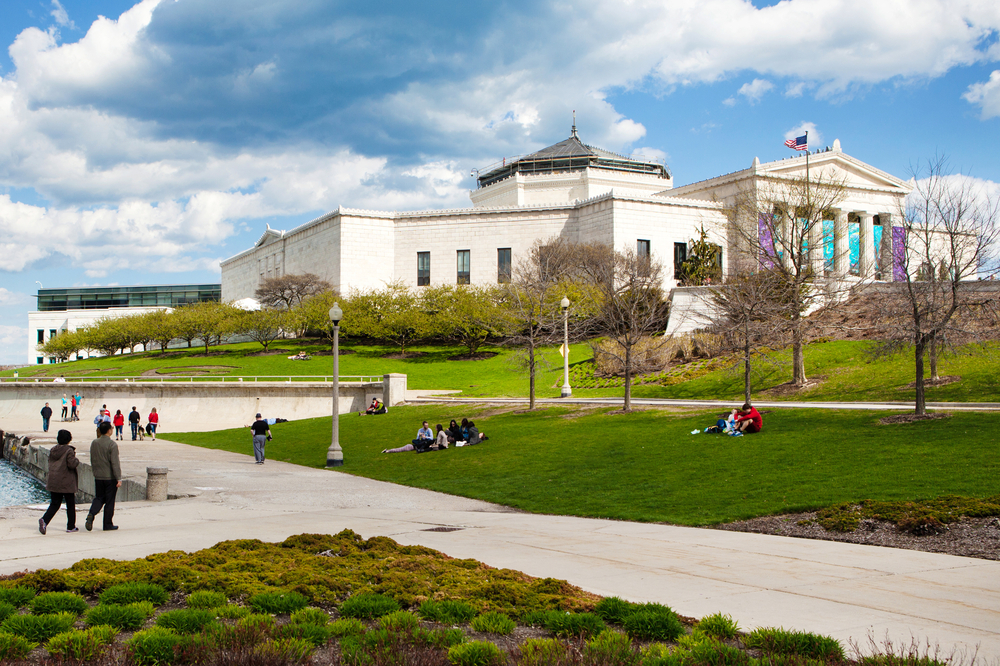 The City of Chicago officially opened the Chicago Museum Campus, a 10-acre lakefront park, surrounding three of the city's main museums, each of which is of national importance: The Adler Planetarium & Astronomy Museum, the Field Museum of Natural History, and the Shedd Aquarium.

Other museums and galleries in Chicago include: 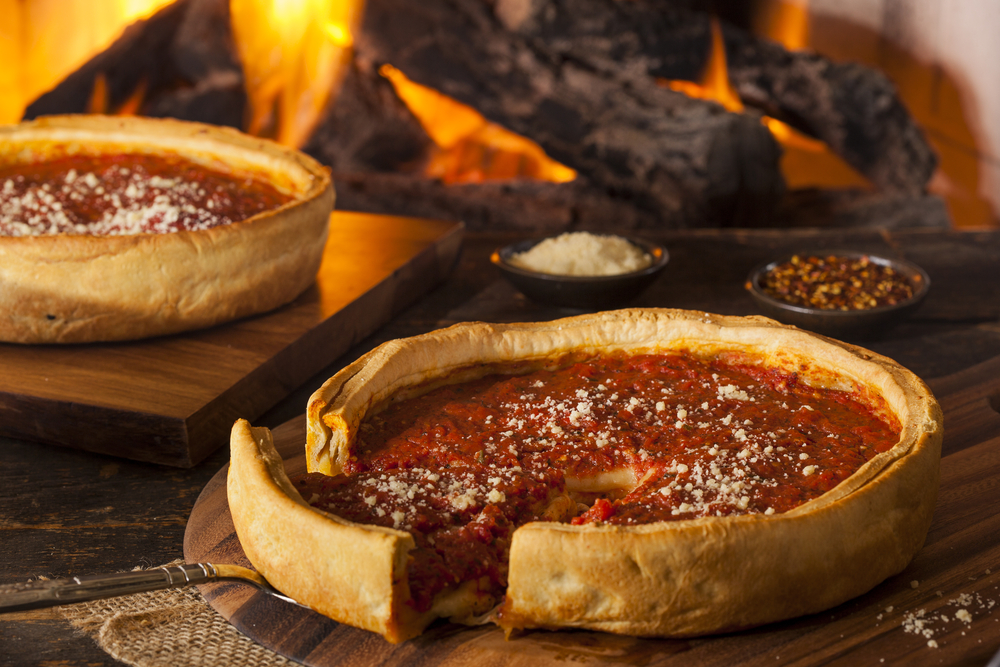 Chicago lays claim to a large number of regional specialties that reflect the city's diverse ethnic and working-class roots. Included among these are its nationally renowned deep-dish pizza; The Chicago-style thin crust is also popular in the city. The Chicago-style hot dog, typically an all-beef hot dog, loaded with an array of toppings that often includes pickle relish, yellow mustard, pickled sport peppers, tomato wedges, dill pickle spear and topped off with celery salt on a poppy seed bun. Enthusiasts of the Chicago-style dog frown upon the use of ketchup as a garnish, but may prefer to add giardiniera.

There are several distinctly Chicago sandwiches, among them the Italian beef sandwich, which is thinly sliced beef simmered in au jus and served on an Italian roll with sweet peppers or spicy giardiniera. A popular modification is the Combo—an Italian beef sandwich with the addition of an Italian sausage. Another is the Maxwell Street Polish, a grilled or deep-fried kielbasa — on a hot dog roll, topped with grilled onions, yellow mustard, and hot sport peppers.